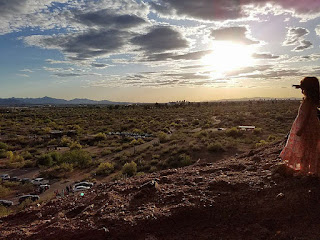 “What did you get yourself into?” I asked myself this question a few times before manning up and pulling myself together. Feeling all kinds of emotions as time drew closer to my departure from Nevada to Arizona, I only had a slight idea of what to expect. I packed lightly for the weekend getaway and dressed comfortably for the long four and a half hour drive. Never have I traveled alone, and oh, boy… was I missing out!

I arrived at Cibola Vista Resort and Spa in Peoria, AZ late at night, it was quiet and the parking lot was very full. I was lucky to have reserved a room with enough time, this seemed like a busy weekend for them, though I later found out the resort is almost always full at least a month in advance during the summer. This is a popular location because of its location and amenities. The resort is near a lake, at the very corner of the small town. 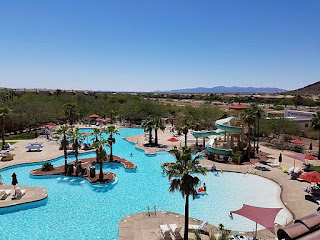 A friendly host welcomed me at the front desk and directed me to where I can find my room. I took an elevator to the second floor of the building and opened the door to my luxurious one bedroom suite. The rooms come with a large tub, a fully equipped kitchen, a Queen bed, a pull out sofa, and cable TV among other things. On the property you can also enjoy the pool with slides, pampering spa treatments, and a game of tennis on the court.

On the second day of my stay, I was given a tour of the property and rooms they have to offer, the next one even more luxurious then the last.

I took off towards Phoenix, AZ and made a quick stop on the way to pick up a pastry/sandwich-like creation from Cornish Pastry Company in Tempe, AZ called The Pilgrim (a pot pie crust exterior with ingredients you can find on a Thanksgiving dinner plate) which was highly rated on Yelp.  Though the British pub looked cool in the dim light and even offered patio dining, I stuck to the plan and took my lunch to-go for a lovely picnic at the park.

Papago Park was small, but so much nicer than I had expected from the pictures I saw on TripAdvisor. The historic park features a popular landmark called “Hole in the Rock” (a large opening in a large rock that was formed by erosion). I sat down to eat my Pilgrim pastry, but sadly it did not taste as amazing as I thought it would. A family beside me was fishing at the large pond and across from me was another group barbecuing. 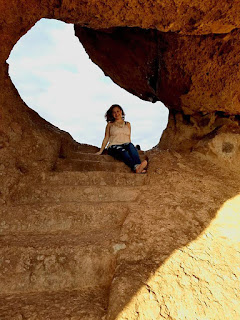 Locals came by with professional photographers for family portraits while others for a nice date or simply to walk their dog. I could tell some of the visitors were not from this country and must have come just to see this lovely park in person. The park also features the Phoenix Zoo, Hunt’s Tomb, and Desert Botanical Garden which is lovely at night (art structures are lit after the sun has set and live music is played). I stayed to watch the sunset which was truly a magical moment where everyone sat quietly on the large rock and gazed out onto the beautiful sky over the town from this peak. 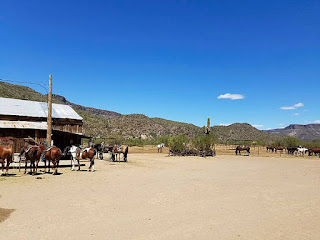 For my last day in Arizona, I had something special planned. The resort offered me a discount to go horseback riding at Canyon Creek Ranch in Black Canyon City, AZ that I couldn’t refuse. This would be my first time riding a horse (I won’t count the time I was put on top of a horse back in Cuba as a small child). With the strong winds and my fabulously short height, it was a struggle to get a calm horse with the right saddle. Caesar the Great (horse) was the one for me.

Sam, my own personal cowboy was incredibly knowledgeable and sweet. He pointed out the historic landmark known as the Thumb Butte, that was clearly seen just behind the property. We were riding where real cowboys rode and Native Americans once lived. He named every plant and shared some fun facts; the Palo Verde is the Arizona State tree, a Saguaro Cactus can live up to 150 years and was used to make wine, and another plant that goes by the name of Sleepy Grass could knock anyone out. During our 2 hour tour, Sam also pointed out ancient antiques left behind by natives. 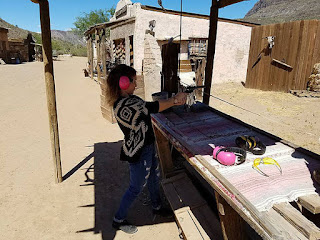 Little did I know that the fun had just begun. We rode into the ranch’s replica of an adorable little Western town where I took a nice break and enjoyed a refreshing cold beer inside the saloon. Sam told me about his encounters with snakes and large rats that looked like small wild hogs along with other entertaining stories. I had a great time playing the authentic cowboy games such as target shooting with an antique pistol and bow and arrow. He also showed me how to properly throw a  Tomahawk onto a wooden wall and lasso a metal bull. By the time the tour was over I felt accomplished and relaxed, as if I had just graduated from a cowgirl academy. 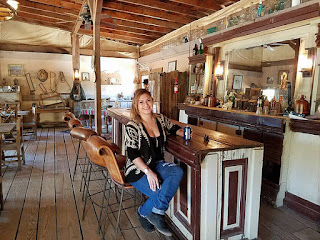 Why didn’t I get out of my comfort zone sooner? Traveling solo doesn’t mean you are alone! I met very nice people everywhere and never felt lonely. I had put my phone away for most of the trip, except to take photos, video, and occasionally listen to music. It was pure bliss; there isn’t a thing I would have changed about this trip. There’s a whole world out there to explore and I have already booked my next flight to another destination I have been wanderlusting about. I am ready to discover what I have been missing out on and you should too.
Published by WanderlustWithMey No comments: 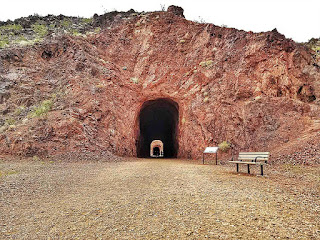 Imagine finding this treasure in the desert! Okay, so I didn’t come by this trail by mere luck, but through an online search. Still, the pictures don’t do this beautiful hiking trail any justice. Before arriving, stop by the Chicken Shack in Boulder City, you won’t regret digging into their delicious chicken sandwich which was too big for me to finish. 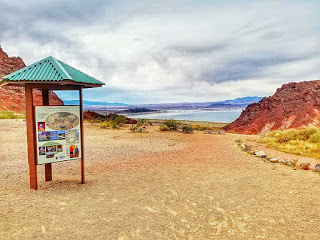 The day was perfect, cloudy and fresh. The entry was very nice, in the distance you can see Lake Mead and a tiny looking trail that disappeared around a mountain. Vibrant red rocks stood out like art on a blank canvas. It is an easy way down, so much that it felt more like a nice walk. Some families rode their bikes while others pushed their strollers through the “not so bumpy” path. Several friendly visitors brought their furry best friends with them to enjoy the outdoors. Others like myself simply enjoyed the peacefulness, views,  and photography opportunities. 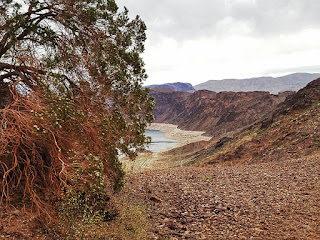 Expect to have a view of the lake through most of the way. This old railroad trail was used to transport materials that were used to create the Hoover Dam. The tracks were completely removed, yet you can still see some abandoned large pieces of cement blocks and metal down the cliff. During the month of May, these abandoned tunnels start filling up with Mexican bats. A few rebels will migrate sooner, I know this because I got to hear some of them chirping in the darkest nooks of the tunnels in April. If you are brave enough to walk a few more miles down, you will end up at the Hoover Dam, where there is ice cream to celebrate your long walk. Now, good luck heading back uphill, this is where I call it a hike. Overall, the Historic Railroad Trail in Boulder City is definitely a place you don’t want to miss out on while in Las Vegas. 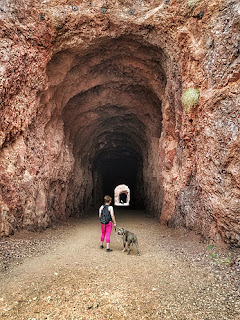 Published by WanderlustWithMey No comments:

WanderlustWithMey
Meyling "Mey" Martinez is a travel and outdoor enthusiast born in the tropical island of Cuba and raised in Las Vegas, NV. Consumed by wanderlust and inspired by nature and the fascinating world outside of her doors, she has set sail to visit new destinations. Forever an explorer at heart with an adventurous soul, she enjoys sharing her experiences and the latest on travel, lifestyle, sustainability, and the great outdoors through blogging.

See more of my articles on Glamping.com!

The Glamping Business: The Campfire Experience